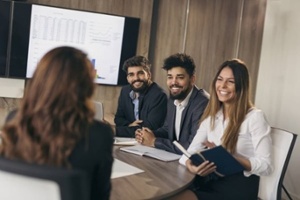 Looking to hire?
+1.855.622.1200
Employers & job seekers have reasons to smile in the most recent Canadian Labour Report.

The last two years have been, to put it lightly, difficult for Canadians and businesses. However, it was not all doom and gloom for the Canadian labour market at the end of 2021.

In Statistics Canada’s December Labour Report good news is abundant. With the caveat that the information was gathered prior to Omicron sweeping the country, here are three positive trends reported by StatsCan.

In more positive news, employment gains among Indigenous Canadians are higher than before the pandemic. Compared with December 2019, total employment among Indigenous peoples is up 10.4 per cent in December 2021. These gains are primarily attributed to increased representation in the fields of manufacturing and public administration.

2. Average hourly wages increase over the last year
According to the most recent Monetary Policy Report from the Bank of Canada, Canadian inflation is expected to remain above the 2 per cent target until 2023. This is a huge cause for concern for many Canadians as we navigate our personal finances and futures.

However, average hourly wages increased by nearly 3 per cent on a year-over-year basis, up to $0.80/hour compared to December 2020. This increase is on pace with the average wage growth year-over-year prior to the pandemic as well.

The report does not cover annual wages but anecdotally wages have also seen an increase in Canada either through the cost of living increases, internal and external mobility and the pressure of a tight candidate market in some industries.

3. Labour force participation remains at a record-high for the core-aged population
The overall share of the population aged 15 years or older participating in the Canadian labour market is back to being essentially the same as it was prior to the pandemic. While the ageing population has seen a slight decrease in labour force participation, the rate for core-aged Canadians (25-54) has remained at a record high throughout the back half of 2021. This is despite the media’s obsession with 'The Great Resignation', which these numbers support more of a reset or shuffling.

Statistics Canada notes that while the labour force participation rates for both men and women who are 55 or older has decreased since the beginning of the pandemic, this is partly due to the percentage of this group that is 65 and older being higher than it was pre-pandemic as our overall population ages.

Overall, employment across Canada has returned to its pre-COVID level in 2021, but that doesn’t mean every industry and province across Canada are having the same luck. While Ontario and Saskatchewan saw employment increases in December, nearly every other province remained the same with a decline in Newfoundland and Labrador. The most notable employment recovery has occurred in the industries of information, culture and recreation – returning to pre-pandemic levels.

Meanwhile, manufacturing has remained stagnant, while accommodation, food services and agriculture all remain well below pre-COVID levels. This is no surprise on two fronts: the North American supply chain continues to sputter impacting the distribution of raw goods and overall Canadians and Americans are not travelling or eating out for business or pleasure at pre-covid levels.

Taking a look at jobs specifically, LinkedIn has reported the top 20 in-demand roles for 2022 and they more or less align with what is reported above. Health care roles dominate, with roles that complement the future of the work (such as D&I managers, talent acquisition) and technology-based positions filling out the list as businesses continue their digital transformation. There are a few perennial roles like directors of financial planning and sales roles.

While we won’t know how much the Omicron variant will impact or stall the progress that the Canadian Labour market made in the last half of the year, we do know that a quick recovery is possible and any losses could be regained by the back half of the year.